Sharing God's Love and Word Within and Beyond Calvary 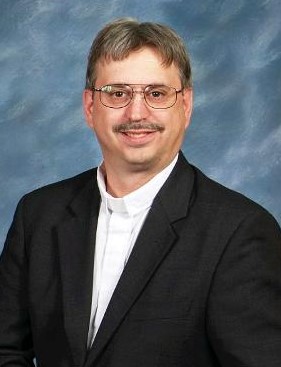 Pastor Paul grew up in Western Canada in Edmonton, Alberta, with his parents and three younger sisters.  He attended Lutheran Collegiate Bible Institute in Outlook, Saskatchewan, from 10th grade to graduation and then attended a year of Biblical studies.  Pastor Paul achieved a Bachelor of Arts Degree, majoring in History, from the University of Saskatchewan in 1987.  Upon graduation, he began a career in retail, working for a number of retail stores in management positions.

In 1995, Pastor Paul and his wife, Phyllis, moved to Austin Texas where he began his studies in the Lutheran Seminary Program of the Southwest.  During his studies in Austin, Pastor Paul worked as a Pastoral Assistant for St. Paul Lutheran Church in La Grange, Texas.  His internship year led him to Harvey, North Dakota, where he served the congregation of First Lutheran Church.  Upon returning to Austin for his final year of study, Pastor Paul took on the additional role of managing the seminary student housing complex.

Upon completion of his Master of Divinity Degree, Pastor Paul returned to La Grange to serve as a Pastoral Assistant while waiting for his first Call.  Pastor Paul has since served congregations in Orange, Goliad, and Seguin, Texas.  He is currently the Pastor of Calvary Lutheran Church in San Angelo, TX.